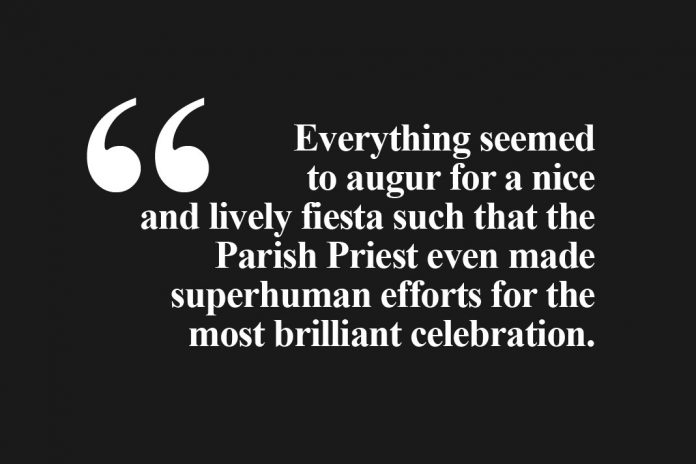 In 1915, Fr. Licinio Ruiz con tinued to share his personal recollections: On this expedition that the reader accompanies me, he will observe that I almost refer solely to the state of the peoples’ moral life, putting to one side their physical concerns.

A nd he will also to see that what I made mention (those things which I fail to mention he could see) that there (in Bais) Aglipayanism, a crowd fomenting discord and a hotbed of countless wrongdoings, had covered a very little ground.

We make the town of Bais an exception finding itself controlled in greater part by sectarians of a former catholic priest.

There is a psychological explanation to show the contrast. Bais, despite being an ancient town, had few Spaniards residing as hacenderos and as a result there were dealings with certain individuals that at times left something to be desired.

It is a town controlled by a cacique, perhaps for reasons of convenience, political or otherwise, who has protected and patronized the sect.

It is very well known that all over and in many parts of the Philippines, the cacique is the one who imposes and commands, whom some for fear, while others not to fall out with the chief, obey and follow the path marked out for them.

Herein lies perhaps the succinct explanation for that phenomenon that one observes between Bais and the other towns. Residing in this town were some individuals, that according to rumors and reports, they were the chief instigators and movers of the outrages committed against the Churches in the entire province, and one can suppose that these individuals might be in the town of Bais.

I myself have been a witness to some of these outrages, (crimes qualified as) verdadedas alcaldadas, committed in cold blood.

The year 1906 saw the fiesta celebration of the town’s patron saint, our glorious St. Nicholas, and in that year the people of Bais in a lavish way, as it were, spared no expense.

Everything seemed to augur for a nice and lively fiesta such that the Parish Priest even made superhuman efforts for the most brilliant celebration.

But here is a town that is split and the dissatisfied Aglipayans, being humiliated before the magnificent display of the Priest and the Catholics, apparently complained to their leader who in those days was holding a very important position in the Province, and this person, abusing his authority, orders and commands that none of the musical bands assemble there, and some of them were granted a subsidy from the Parish Priest, might play inside the church nor join the procession, and that if they did not follow his intent, they got to undermine and spoil the fiesta.

Of these outrages and other instances that happened, I published an article in Nuevo Heraldo, an article that according to trustworthy people was read and duly noted by the Governor General back then.

But if the Governor General duly noted what happened in the fiesta of Bais, they, the revolucionarios, neither having been considered as alluded to nor troubled by the finger pointed at them, but on the contrary were exerting more efforts to turn the people of Bais away from Christianity, perhaps thinking about new and more sinister criminal plans.

In fact, a little more than a year had transpired from the memorable fiesta, it happened one night when the Catholic Church, a labor of so much love of Fr. Guillermo Garcia, pastor of the town in times past, was reduced to ashes, leaving nothing but the four walls made of strong materials.

So much did it hurt the poor Fr. (Francisco) Solchaga, pastor of Bais at the time, upon turning his sights around, as he gazed at the smoldering ashes even of God’s temple, there was no voice of protest in a town of 8,000 souls.

Just some lady and then another, ascending up the convent, was crying and sobbing at what happened. It is said that less painful are the sorrows when someone shares them. And if this is true, the pain and grief of Fr. Francisco could be so great at the time.

God, Our Lord, recompensed him for so much of the suffering, inspiring our Superiors that Fr. Francisco was named Vice-Rector of our College in Monteagudo, and Fr. Luis Recarte made as his successor in the parish of Bais (in 1909-1914).

What a sad thing Fr. Luis inherited: a town controlled by a cacique that led a sect. Aside from being intimidated, the Catholics were few in number.

Then, there were some Spaniards that could have served as source of comfort and help to the Priest, but they were even more intimidated.

There was no Church where to respectably celebrate the divine worship. This is the situation Fr. Recarte found himself in Bais, Nonetheless, Fr. Luis did not lose heart.

With a genial character and good dealings, he knew how to win the sympathy of the people, even among some leading men behind the Aglipayan movement, that if it did not bear fruits in great number, he managed to prevent abuses by schismatics, and everything went in peace.

But despite his tact, gentle and kind, his heart suffered interiorly and unspeakably, upon finding out the small space where he was celebrating the Holy Sacrifice of the Mass, always being empty.

When he used to see them showing up to get married or bury the dead, at the slightest comment of the Priest, they would walk away and go to the Aglipayano, and when he was observing the well-attended fiesta celebrations of the Aglipayans.

On more than one occasion, he bitterly complained to me of how he suffered in the face of so much deviancy and disdain for God, Our Lord.