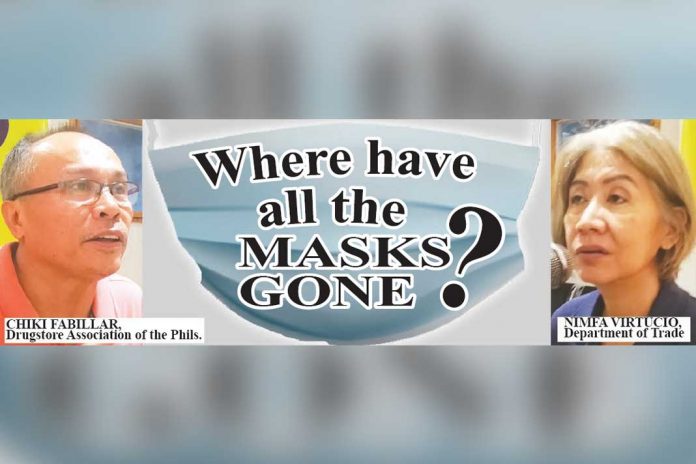 The Drugstores  Association of the Philippines  and the Dept. of Trade  revealed that the reasons why emergency face masks are nowhere for sale in drugstores and so are the E95 protective face  masks—is because  the hospitals nationwide are being prioritized for possible influx of Covid19 patients while more imporation is being ordered and local manufacturers being encouraged to produce more.

But the bad news is:  the prices in Manila are now higher ( P15 per mask) higher  than the DOH price ceilings in the provinces  which is only P12. Thus the drugstores  are no longer buying lest they be caught overpricing the ceiling of P12.

Solution:  DTI wants DOH to set the increase to P16 per mask so that the local drug stores can sell it with a small  mark up.

Similarly, the N95 protective masks are pegged by DOH at p105, but Manila suppliers sell it at P150 maximum per  mask so the local drugs stores are no longer buying.

Solution: DTI asks DOH to  allow local drugstores to sell it higher  so it can offset the Manila costs with a small mark up.

DTI provincial officer Nimfa Virtucio also told CROSSTALK RADIOSHOW   that  DTI merely implements the price ceiling which are set by  DOH. It does not even have a police power  against violators unless there is a sworn complaint.

Virtucio added that she will ask  her Manila head office or email the secretary of DTI about the situation here. Meantime,, it’s a status quo situation. No mask  No orders, until the price ceiling is adjusted.

Chiki Fabillar, national area coordinator for Visayas of the Drugstore Association of the Philippines and former president of the local drugstore association chapter of Negros Oriental, in an interview with CROSSTALK radio show at DYEM BAI RADIO         said,  they do not mind the  Dept. of Trade in being  very strict in monitoring local drugstores so long as they can have  little profit.

There are 90 local drug stores all over the province which is headed by Rey Roca as president.

Chikki FAbillar further revealed that most of the  90 drug stores in Negros Oriental can afford to buy, and supply emergency face masks, but it is their Manila suppliers that are starting the overprice and they  , here are closely monitored and cannot raise their prices.

That is why local drug stores prefer to no longer sell protective face  masks  unless they can have a little mark up.

Fabillar said that drugs store business is  less lucrative unlike  other retail business because the profit for drugstores  is only 6% not to include overhead expenses.