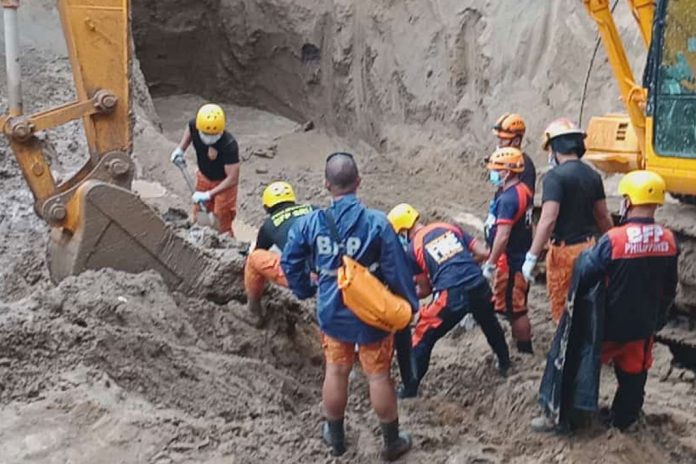 The provincial and city governments have launched  a major crackdown on  all kinds of illegal treasure hunting anywhere in Negros Oriental. This massive huntdown was an offshoot of the death of three illegal diggers last  New Year day in Bolocboloc Sibulan because their tunnel caved in.

This was the first major catch of illegal treasurer  hunting in the heart of the City even as several others were reported by not documented in the past.

Negros Oriental Gov. Roel Ragay Degamo is expected to come out with a province wide executive order for all concerned, to  cease and desist order against all forms of illegal diggings and excavations that have  no permits from the National Museum.

This is also in reaction  to reports reaching the capitol  and the Provincial Disaster Risk Reduction Management Council (PDRRMC) that illegal treasure huntings are going on elsewhere  in the municipalities.

Learning from the trajic experience in Boloc-boloc, Sibulan (Photo left) where the soil is sandy and the tunnel of the illegal gold diggers caved-in killing all the treasure hunters.,the governor said hence forth the law will be strictly enforced and all kinds of  treasure hunting will require prior  permit from the National Museum. He believes soil testing should also be required before the permits are issued,

As an offshoot to the tragedy that hit three families in Dumaguete, Valencia and Sibulan, concerned citizens have responded to calls to report illegal treasure hunting activities conducted anywhere in the province of Negros Oriental.

Late Friday evening, just as the third casualty was retrieved from the cave in, in Boloc-boloc, Sibulan, neighborhood of two puroks in barangay Junob, Dumaguete went to their village chief Punong Barangay Maximino Umbac Jr. to report an ongoing treasure hunting in two puroks, namely, Purok Kasadya and Purok Lonoy.

The following morning, a team from the Community Environment and Natural Resources Office (CENRO) led by Efren Rumbaoa and enforcer Onie Babiera and accompanied by baragnay officials headed by the punong barangay, conducted ocular inspection and found out the reports were true.

The two diggings were immediately advised to stop and to secure the necessary permits. The diggings are located in the property of Lilibeth Torres of Purok Lonoy and that of Arnold Ragay at Purok Kasadya situated along the Balugo-Dumaguete road.

Initial investigations disclosed the diggings at Purok Kasadya are on and off for two years already and in Purok Lonoy, the treasure hunting was started a month ago, and that both owners claimed for purposes of establishing a deep well, and has depth of 30 feet already.

The punong barangay said, it is possible that the diggings at Purok Kasadya has also traversed from one property to another because the target is the “Tipolo” tree which is situated adjacent of the barangay road.jrg