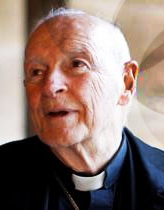 NO PAIN,  NO HEALING

Theodore McCarrick is the most senior Catholic figure to be dismissed from the priesthood in modern times.

US Church officials said allegations he had sexually assaulted a teenager five decades ago were credible.

Mr McCarrick, 88, had previously resigned but said he had “no recollection” of the alleged abuse.

“No bishop, no matter how influential, is above the law of the Church,” Cardinal Daniel DiNardo, president of the United States Conference of Catholic Bishops said in a statement.

“For all those McCarrick abused, I pray this judgment will be one small step, among many, toward healing.”

The alleged abuses may have taken place too long ago for criminal charges to be filed because of the statute of limitations.

Mr McCarrick was the archbishop of Washington DC from 2001 to 2006. Since his resignation last year from the College of Cardinals, he has been living in seclusion in a monastery in Kansas.

He was the first person to resign as a cardinal since 1927.

He is among hundreds of members of the clergy accused of sexually abusing children over several decades and his dismissal comes days before the Vatican hosts a summit on preventing child abuse.

The Vatican said Pope Francis had ruled Mr McCarrick’s expulsion from the clergy as definitive, and would not allow any further appeals against the decision.

This is a significant moment in the Roman Catholic Church’s effort to address the tide of sex abuse scandals – not least because of the high status this former Cardinal Archbishop once held.

Not only was he the first cleric in more than 100 years to resign from the College of Cardinals, but his removal from the priesthood also confirms Pope Francis’ assertion that anyone found guilty of abuse will be treated with zero tolerance, regardless of their status within the church.

The Vatican has said that the investigative process was completed in January and Mr McCarrick was informed of the decision to dismiss him from the priesthood last night. It comes days before Pope Francis will host all the presidents of bishops conferences around the world at a summit in Rome.

The summit is designed to reflect upon the global challenge of abuse and to develop protocols and procedures that could be applied across continents.

What are the allegations?

Mr McCarrick is alleged to have assaulted the teenager while working as a priest in New York in the early 1970s. The claims were made public by the current Archbishop of New York, Cardinal Timothy Dolan.

He said an independent forensic agency had investigated the allegations. A review board, including legal experts, psychologists, parents and a priest, then found the allegations “credible and substantiated”.

At the time, Mr McCarrick said in a statement that had “no recollection of this reported abuse” and believed in his innocence.

Several more men have since said the cleric forced them to sleep with him at a beach house in New Jersey, while they studied for the priesthood as adult seminarians. One man has come forward saying he was assaulted while still a minor.