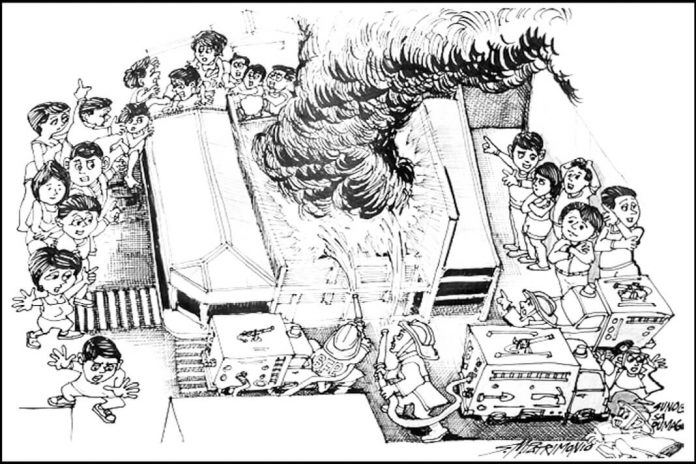 DUMAGUETE CITY – Amidst several violations of the Building Code, several interior house owners in the heart of downtown Dumaguete attested that had commercial buildings not built firewalls higher than their edifices, that Wednesday dawn fire of May 29 could easily have gotten a very big portion of Dumaguete’s downtown area.

Thanks to the firewalls of downtown Dumaguete, dozens of firetrucks that responded were given a break of their lives because in three hours, the fire which gutted the historic Times Mercantile and the one adjacent building were the only ones burned down.

Times Mercantile is part of Dumaguete’s history. Its former location down the road of Locsin street used to be the hub of drinking buddies among lawyers , fiscals, and judges hosted by friend and owner, the late Tony Gomez. Their first site was burned and now their second. We hope the city will help rebuild Times Mercantile which is the local version of Times Square because Times is part of our history.

More importantly, it’s time our barangay and city fire hydrants be given annual inspections. We notice water pressure is not enough farther from the city. Thanks to the new city super water tankers which escort every fire trucks’ fire call, there is assured water supply during critical moments in an emergency when water supply dwindles just when the fire battle is almost won.

Finally, it is time to GO UNDERGROUND as a city policy in installing old and new electric, cable TV, and telephone cables. Let’s cut all those “cable jungles” around the city. They are history. Mayor Remollo, please convince the council majority to make this a priority legislation. We simply owe it to the new wireless, paperless, and Wi-Fi technology. Those dangling “Joe-Pro: vintage cable wires around the city should now be part of the coming City Museum.