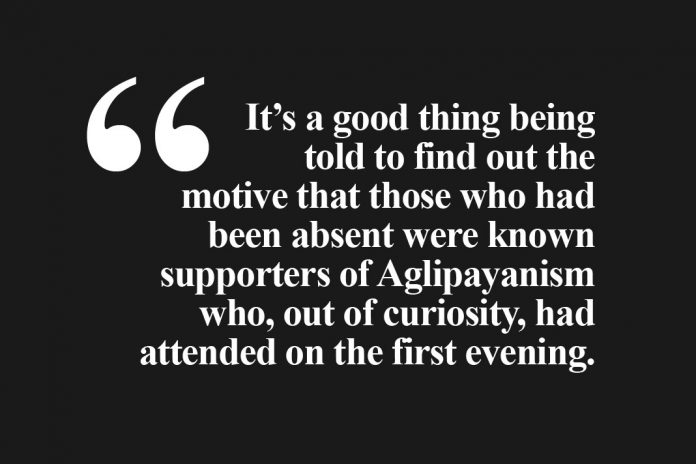 Fr. Licinio Ruiz also reminisced: Once condoling with him (Fr. Luis Recarte), not only on his sufferings but even on the sad state of those in Bais, I decided to go to the said town on a mission, with the purpose as I could of animating those hearts as though gone dead with indifference, and in effect, I did so.

As soon as I arrived at the town, word has it that I came to preach many sermons at a special and opportune hour so that men and women of the laboring class could come as they might wish.

On the following day, in a designated hour, after several ringing of the bell, before one hundred and fifty persons gathered in the small church, I began to deliver my simple conferences on Aglipayanism, allowing them to see the error they were in, offering proofs neither based on Sacred Scripture, nor on Dogmatic Theology, but on simple reasons that could easily be comprehended by them. But what a heartache and great disappointment I achad when I noticed that on the second evening fewer people had come than the first!

It’s a good thing being told to find out the motive that those who had been absent were known supporters of Aglipayanism who, out of curiosity, had attended on the first evening. I went on giving the conferences without any setback until the sixth day, a Saturday evening, when the Aglipayans with their leaders organized a demonstration against us.

The two of us, Priests, were standing so near a platform they built on the extreme end of the plaza and in a very public place. After several emissaries had gone about the market place and all the streets to round up and to take everyone by force, walking down the streets, when there were already quite a lot of people, an unfamiliar individual gave a hate speech that was full of absurdities, in which to his liking he meant to finish us off, hurling more terrible taunts at the friars, blasphemies in the real sense that a few times I had heard in my life.

As if this might not be much, I told one of the leaders standing around: “Here is a sermon that is proper.” May God pardon him, as I prayed at the time that He may pardon all the people of Bais, seeking pardon in the sermon that I preached at Sunday morning and the last day of the mission, for those wretched people who were groaning in darkness of error and sin.