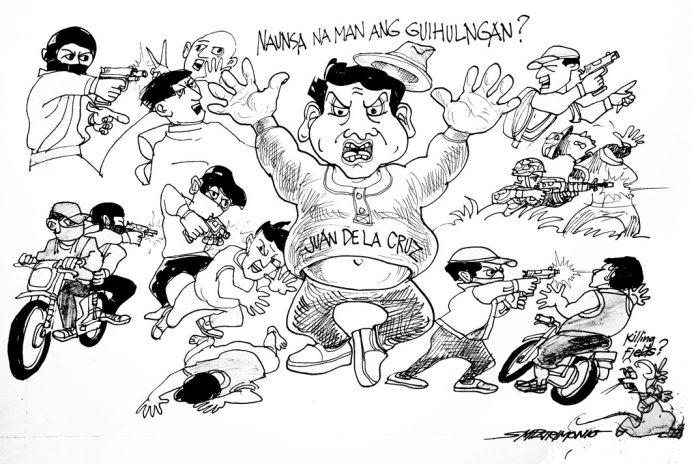 We took notice of the dead serious-ness of the seeming weekly end-less violent killings in Guihulngan City, north of Dumaguete, when a group of national agency inspectors decided to skip visiting the war torn city of Guihulngan unless the violence subsides.

In short, even imperial Manila is now skipping Guihulngan (to rot?) This is unbelievable under an era of a strongman, martial law, equity of the incumbents, fureza ng masa, whatever.

True enough, even the governor has expressed deep concern (or helplessness?) about why the peace keeping forces have not been able to control, at best, contain the violence. Waiting for President Duterte again? Can nothing happen without the kick of Duterte? That is their responsibility to keep the peace in their assigned area. Why wait for Duterte while people are getting killed? Even riding the habalhabal is no longer safe. What is safe?

Quick background: this is an insurgency war of the right and left. Six policemen were ambushed which became the start of a series of retaliation from both parties without making it obvious that it was their orchestration. That is an old modus.

Insurgency is a given. Never solved for 50 years. The longest in the world. But there are deterrents that will prevent bloodshed even during or without the pendency of peace talks. Why is nobody initiating this?

Until the causes of insurgency are removed, it will always be there: double standards of justice, graft and corruption, land grabbing, drugs, political dynasties — you name it, the Philippines has it.

So, will it take only a Duterte to bring a truce to Guihulngan? Who will run to Duterte, the governor? The mayor? The church? Nobody is doing it.

So the killing continues. This means, our local government leaders including the congressional representative there are incapable of restoring peace in Guihulngan, except to close their doors and windows when nightfall comes ——and let the ghosts take over.