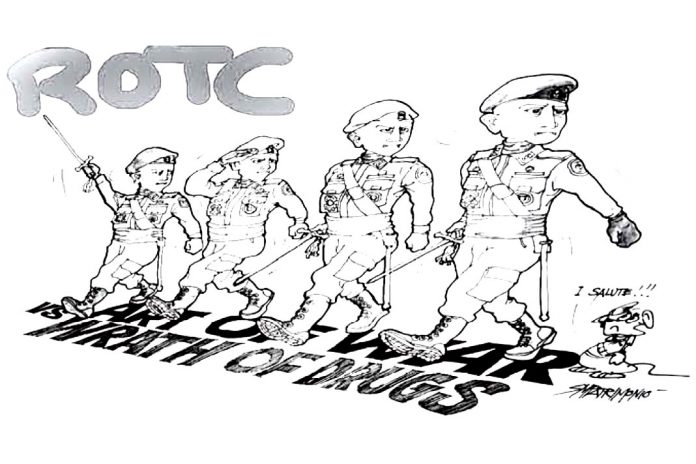 President Duterte does not want to impose martial law powers on the male college students of the country that is why he is waiting or even asking his party mates in congress to pass the Mandatory ROTC law.

We, the senior citizens now, who passed and took ROTC during our first two years in college say that ROTC which is the Reserve Officers Training Course was a good occasion to learn self-discipline and submission and respect to authority. It also taught us to have a sense of purpose and direction in life and a good practice of community living in harmony and cooperation.

Historically, when the stigma of Marcos martial law was still prevalent after the EDSA revolution, even the ROTC then was abolished because of the stigma of watching the youth march wearing military uniform. This reminded the EDSA revolutionaries about martial law so they scrapped the ROTC officers’ training course in college. Even the women college students were also required to take the CAT course called the Citizens Army Training. President Cory also scrapped it.

There is absolutely nothing wrong with mandatory ROTC in college. After all, when the real time comes of military drafting, nobody can refuse. The ROTC graduates are given reserve office status. In contrast to those who did not take ROTC, they will be treated as simple private soldiers whose assignments will be in the frontline in case of war. There will always be time when military drafting will come and we don’t know when.

Even the NPAs are given mandatory military training by their comrades. Their punishment is worse if you refuse being militarily trained in NPA camps. In fact, you will be sent to some military camps in faraway mountain provinces to train as cadres. The NPAs are trained like the ROTC. The only difference is that they use real bullets and are given real assignments.

So we say ROTC should be mandatory so that all our boys will not just rely on war games on their cellphones and computer cyber games but also get a real taste of war games in the field. Most of all, it is fun to join the ROTC and learn the art of war.

ROTC is good training to learn selfdiscipline and self-survival as well as the virtues of patience, obedience, and submission and respect to authority. It highlights a sense of purpose and direction in life and provides an avenue to exercise good citizenship and building a community where there is harmony and cooperation.