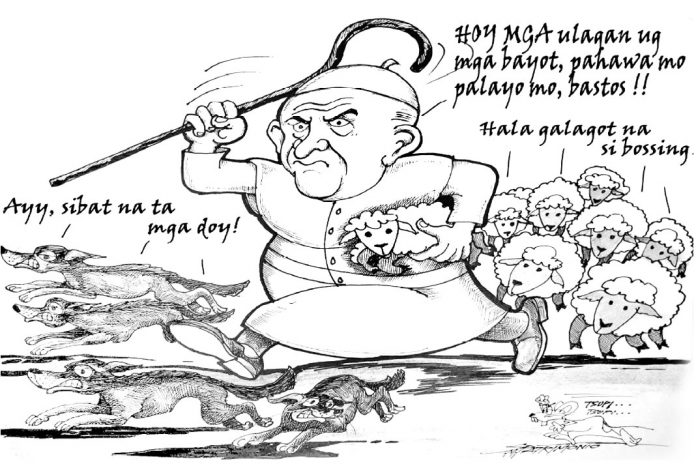 As the evangelical sum-mit called by Pope Francis  among bishops all over the world ended amidst  strong criticisms claiming it was all talk and   generalities and motherhood statements minus the specifics, — we raise this challenge to the accusers and victims  of sex molestations to come out with specifics and name their abusers so that the rest of the good clergy will be spared from  what  Pope Francis described as demonic agents within the clergy.,

While we see the sincerity of the Pope in admitting the sins of the few that smeared the good name of the innocent majority, we urge the victims of sexual abuses to be men and women enough to name their abusers so that they will be brought to justice.

In the Philippines, we urge the Human Rights movements and the Gabriela, protector of abused women, to lead the way in urging victims to name those priest abusers.  Are there sexual abusers among the clergy in Negros oriental.? Loud whispers are heard. The Diocese of Dumaguete thru its chancellor announced that the complainants, if any, should come out so that the innocent will be spared.

Right now it is the church who are naming alleged abusers while the victims are just crying and denouncing their plight to the traditional and social media.  The victims should now name their abusers because it is only fair game so that the innocent will be spared.

We saw our Cardinal Tagle shed tears at the summit….and for whom did he shed tears?  For the victims or the abusers?  If for the victims which we believe he cried for, he should tell the victims to name their abusers so the innocent clergy like him will be spared. We are sure that there are only a few sex abusers among the clergy and the majority are so embarrassed.

Secondly, as a long term solution, we dare suggest that the Church must now make celibacy optional.  After all, the disciples of Christ were all married starting with the first Pope Peter.  Celibate disciples remained only due to  their own choice.

This celibacy vow of priests is like the forbidden fruit in the garden of Eden.  The more priests are prevented  from marriage , the more the priests are tempted.  There’s a big difference when there is a wife who is not only your guardian angel but the real watchdog to keep you from doing  the hanky pankies of mahood.

The male-dominated church should  stop hiring women to work in  convents and church offices.  How strong will a town or city priest be against sexual temptations—-  if he is a virtual solitary occupant in a big convent?

So, the best action the Church can do to exonerate itself from future sexual abuses is for the victims to name their priest abusers past and present, and for President Duterte to lead the way by  naming his own priest abusers whom  he claims he was a victim as a teenager and lock up  those priests in jail after due process  and as an example. This is an offshoot of Durterte’s very recent statements  that his tirade  against  bad practices of  the Church is his personal battle against his molestors   and not in behalf of the State.