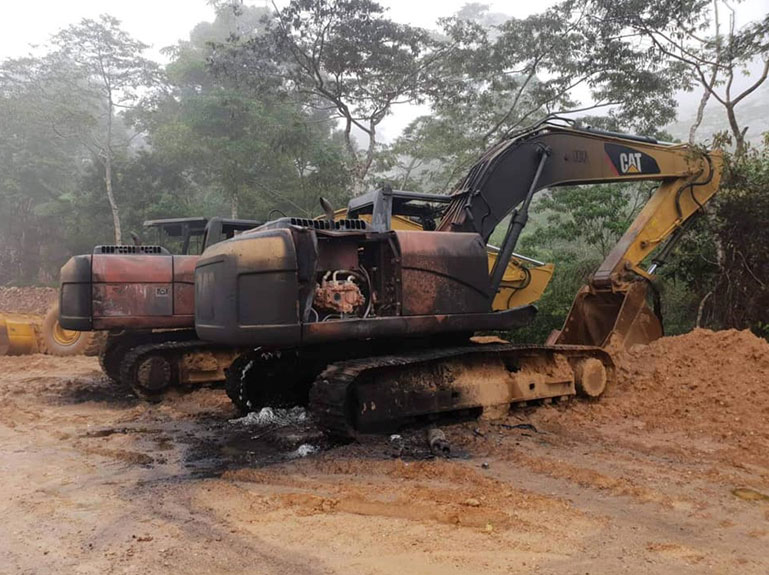 A private mining company was forced to suspend operations after P120 million worth of heavy equipment were torched and destroyed by suspected NPA rebels in the silica quarry site in Barangay Jandalamanon, Ayungon, on new year’s night.

Mayor Edsel Enardecido said that at least 13 heavy equipment owned by Pilipinas Eco-Friendly Mining Corporation to include backhoes, dump trucks, generator sets, crusher and payloaders were destroyed by about 50 rebels who swooped down the quarry site past 11:00PM, Tuesday.

However, Mayor Enardecido claims that the company has been mining for almost a year without a business permit from the municipal government as it failed to comply even the basic requirements as enumerated by the local authorities.

The local PNP reports that the rebels disarmed the two security guards on duty before torching the multi-million heavy equipment.  Although the heavy equipment may have been insured Mayor Enardecido is not certain if the policy covers arson cases.

Enardecido said that the rebels who raided the quarry site are not from Ayungon but could be from Negros Occidental, who merely assembled to carry out the attack considering that there are no known rebel encampment in his town.

The rebels allegedly claimed responsibility of the attack in opposition of the company’s operations that would harm the environment and threaten the livelihood of the farmers and fisher folk.