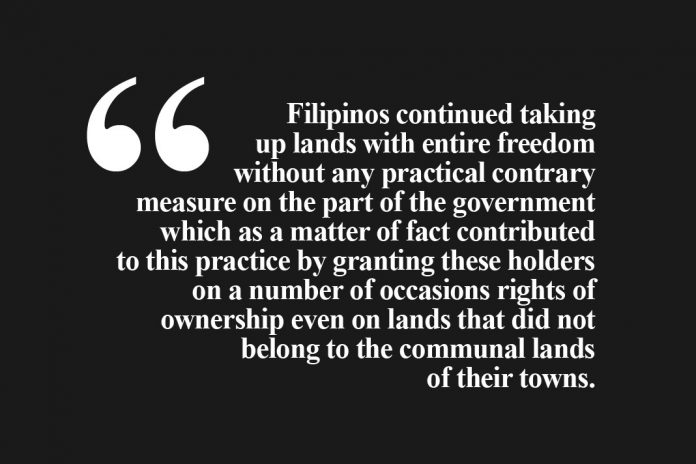 Continued from last week: In September 1796 a Royal Decree was promulgated restricting the rights of natives to choose their lands to the communal lands of their own towns.

Outside these communal lands, they could only acquire lands “by buying them from the Crown in the same manner as Spaniards or persons of other castes.”

This Royal Decree was not enforced. Filipinos continued taking up lands with entire freedom without any practical contrary measure on the part of the government which as a matter of fact contributed to this practice by granting these holders on a number of occasions rights of ownership even on lands that did not belong to the communal lands of their towns.

As Ramon Jordana says “under the circumstances the legal appropriations of Crown lands were so rare that they were hardly fifteen to twenty applications from 1800 to 1875. Custom had legalized the usage of Indians and Chinese mestizos of appropriating any portion of the public patrimony regardless as to whether they cultivated it or not, whether it was inside the communal lands or not, and of selling or transmitting it to their own heirs as their absolute property”.

The efforts of the (Leopoldo) O’Donnell’s government (1862) to regulate the acquisition and sale of these lands were ineffective.