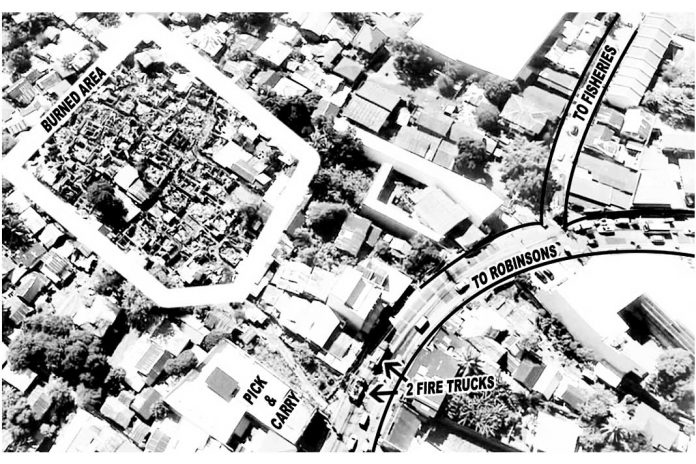 After a series of very costly   new and past fires  which gutted precious hard earned houses of poor families in Dumaguete,  it is about time the City Council push for strict implementation of  laws requiring roads for  “roadless” cluster of houses not only in squatter areas, but more so in private lots whose owners apparently care less in providing roads for their tenants , even just wide enough for fire trucks and ambulances  to maneuver in case of emergencies.

Latest case at point was the P10Million purok Gumamela fire last Feb 12 which razed 57 houses  very closely standing close to each other, that the fire trucks had to extend and squeeze  their water hoses because there was no road available.

The P10Million fire damage was estimated by fire and insurance analysts based on the average cost per house of P200thousand at fifty houses totally damaged. Although in actuality  57 houses were totally down.

Better still, if the lot owners who are renting out their  inherited properties cannot build the  minimum 4-meter road within, then at least they should be required to  put up their own fire hydrants and water hoses  so they can respond quickly in cases of  emergencies.

But if our law enforcers in the City are slow and indifferent in enforcing our ordinances, then these man-made disasters can be their own un-doing.

But first let’s check if the City Council has indeed passed such ordinances.  (Worse if they haven’t!)   We are sure that the laws on subdivisions require four to six meter-wide roads within. But what is at issue are private inherited lots whose heirs care less in providing adequate safe and wholesome even modes houses in their places which are being  rented out to tenants.

Worse is that these kinds are the ones that are being patronized by many  leasees  because of the tenants’ desire to look for cheaper places of abode within which they can afford.

So it’s either that the City administration  strictly enforce such laws requiring roads for firetrucks and ambulances  in congested areas, or, people will continue to suffer the risk of  losing their properites any time  to unnecessary conflagrations God forbid.

May the Gumamela fire incident of Feb 12   be the last of such official negligence of our city enforcers.