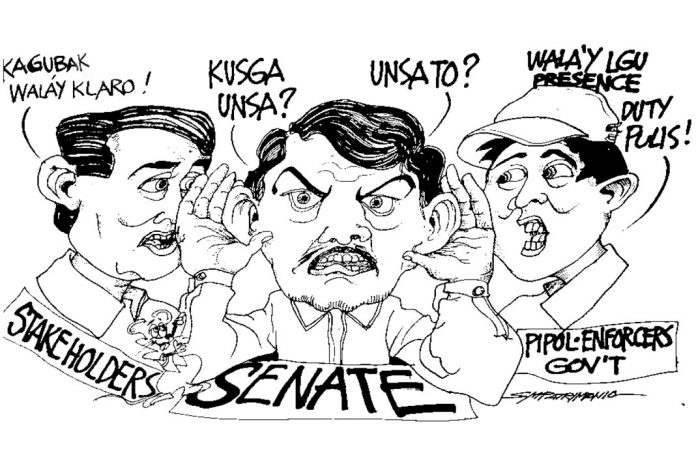 Senator Ronald dela Rosa, chair of the Senate committee on public order and dangerous drugs, supported   the call of Senator Risa Hontiveros at the Senate investigtation    into the spate of killings in Negros Oriental and even  Occidental for that matter  attended by Negros Oriental officials, including Gov Degamo  police officials region 7  Gen Debold Senas  , Col Bonifacio Tecson, Guihulngan chief of police,  and other stakeholders in Negros Oriental.

Sen Riza Hontiveros stressed the importance of an investigation after learning that 5 of the 15 people tagged as alleged communist sympathizers in leaflets circulated by Kawsa Guihulnganon Batok Kumunista (Guihulngan Against Communists) or Kagubak had been killed.

Sen. Hontiveros and Bato  confirm  that the Kagubak hit list is apparently  real. Although in reverse psychology, it could yet   also be the creation of the other  adversary they were trying to project..

So who will investigate the anti com Kagubak when the police is also obviously  anti communist? Maybe an impartial body like the Commission on Human Rights but  CHR PEOPLE  also claim that they are not given the facts of the case, so how can the CHR investigate if they do not have all the facts from the police?  They want the church to investigate?  Which we are sure it will not.

But the fact remains that  based on the supposd hit  list, supposedly by the  Kagubak  they have a bloody track record in Guihulngan,” said Hontiveros who, along with Senator Leila de Lima, filed the resolution seeking a Senate investigation into the Negros killings.

Negros Oriental Governor Roel Degamo, who attended the hearing, said he would do his best to “dismantle” Kagubak. Sen Bato wants to know if the remaining names in the  list of Kagubak are still alive.

Guihulngan police chief Lieutenant Colonel Bonifacio Tecson said 4 others on the Kagubak list had been killed. They sought police protection as early as 2018 but Tecson said was reassigned to another unit.

But first before pursuing Kagubak, let it first be ascertained whether or not their victims were really pro and supporting the commies.  If they are not sure then it is not also sure whether Kagubak is legitimately anti com.or is just a creation of another agency.

These were the highlights of the senate hearing on the Negros killings in July. (Rappler.com)