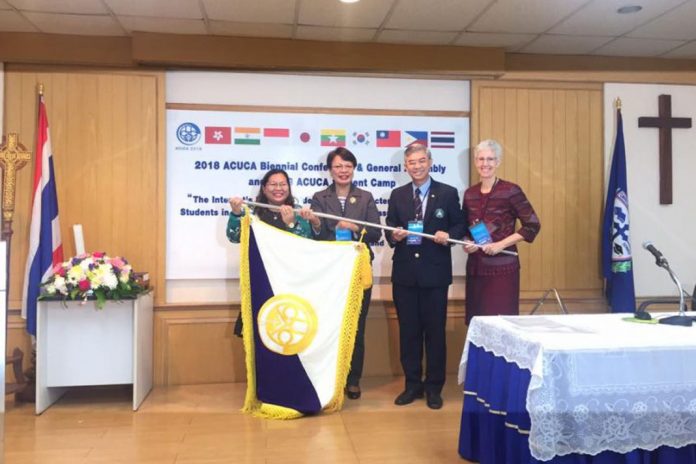 DUMAGUETE CITY – Silliman University president Betty Cernol-McCann (center) was recently installed as president of the Association of Christian Universities and Colleges in Asia (ACUCA) for the years 2018 to 2022.

ACUCA is a community of Christian institutions of higher learning in Asia that work closely together to benefit each other as well as the societies in which they exist. The association aims to help Christian universities and colleges in Asia to develop and maintain their Christian character, enrich the quality of their educational programs and those of other institutions of learning, and re-examine the relevance of their objectives and programs in relation to the needs of a changing society.

Currently, ACUCA has 62 member institutions in eight countries of Asia, namely, Hong Kong, India, Indonesia, Japan, Korea, the Philippines, Taiwan, and Thailand. Silliman University is among the founding members of ACUCA when it was formally established in 1976.

The new ACUCA leaders were installed during the association’s Biennial Conference and 22nd General Assembly held from October 11 to 14 at the Christian University of Thailand in Nakhon Pathom. Dr Jenny Elmaco, director of the SU Office of Strategic Partnerships, was also installed as ACUCA’s secretary-general during the assembly.

Dr. McCann’s presidency of ACUCA follows a rotation arrangement among ACUCA’s member universities. She takes over from Dr. Rux Prompalit of Payap University of Thailand. Dr. McCann and Silliman University will play a leadership role toward advancing ACUCA’s goals in the next five years.