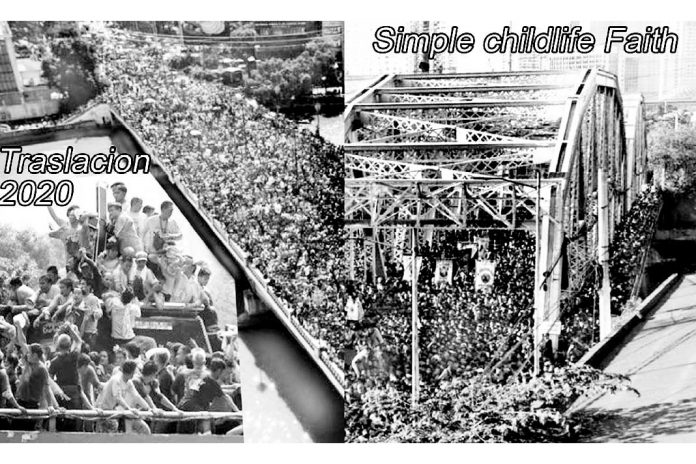 When a local Dumaguete clergyman  was asked:  why do people in Manila prefer to trek the January 9 ordeal of honoring the image of the Black Nazarene, and not in some other day where there is less crowd and easier to make adoration?

The clergyman answered: it is simply a simple man’s expression of his “childlike Faith” which Jesus Christ Himself considered as the most acceptable before God. Jesus said : Nobody enters my Kingdom without the faith and heart of a child.

It is the sincerity of the heart that matters, because God looks at the Heart.  Not all devotees are there for what Jesus describe a childlike faith. Many have other motives.  That is why Jesus said:  many prayers are not answered because people pray with the wrong motives.

The only explanation why people claim and believe they are healed by their Faith in the Black Nazarene is because of their simple childlike faith—no questions asked, just believe as what Jesus always said.

For over four centuries, this historical and iconic miraculous statue of Jesus Christ carrying his Cross has become an emblem of passion, struggle and faith for Filipino Catholics. Let us respect their Faith because only God can see the heart of every man.

The Quiapo church which hosts the statue never sleeps. It welcomes devotees early in the morning till late evening. During the day, it holds continuous Masses and Healing Services. During the night, the church shelters poor homeless people who may spend the night there. In the early morning, the church is cleaned and again reaches out to the pilgrims and devotees.

Every year on Jan. 9, the annual feast day, millions of devotees gather to celebrate the Feast of the Black Nazarene. They take part in the spectacular religious procession known locally as the “Traslacion,” which simply means the transfer of the venue of the image from the Luneta to the Quiapo church.

Millions of participants take part in the annual procession and the festivities that surround it. Last Thursday the procession lasted for 16 hours four hours short of the traditional l20-hour long trek.