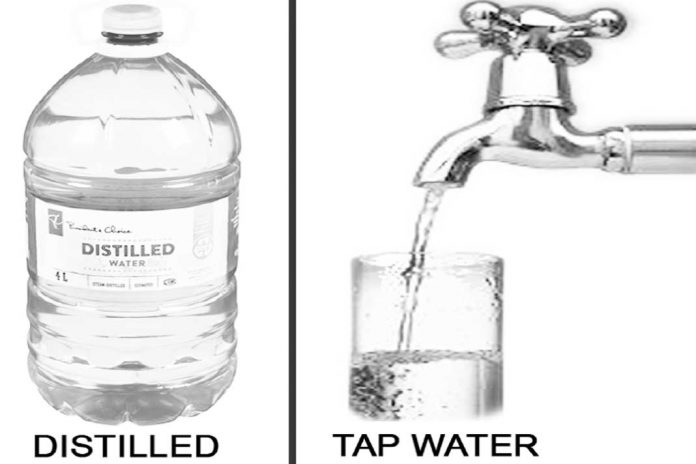 Which is better for us to drink—distilled or tap water?

There are at least two opposing views on this topic.  Harvey and Marilyn Diamond, in their 1987 best-selling book “Fit for Life II: Living Health,” say that we should drink only distilled water.

“Since it is pure water that your body needs, there is only one type of water suitable for your body—distilled,” says the book. “Distilled water is the purest water available. It is nothing but water.”

The authors are aware of the big controversy surrounding this issue. They declare, however, that there is no valid argument against the use of distilled water.

According to them, “All water occurring in nature is more or less impure, some very impure.” This includes mineral water, spring water and well water.  “Water from these sources has dissolved and suspended mineral matter, not the kind the body uses, but inorganic minerals.”

‘Tap water is most healthy’

In complete contrast to this view, Jaime Dy-Liacco, a doctor of metabolic medicine and pancreatic cancer survivor, empathically states that only ordinary tap water is the most healthy and suitable for human consumption.

Distilled water, according to him, is bad because it makes our stomach alkaline, which is not what nature has intended it to be. “God made the stomach acidic so that it can easily digest the food we eat,” he declares.

Tap water, he says, contains at least 72 minerals that the human body needs, whereas distilled water contains practically no minerals at all.

Distilled water, he adds, is not pure water. “Most of them, especially the bottled ones, contain bacteria, fungi and other ingredients that are bad for our body.”

What about the chlorine that is found in tap water? Isn’t that bad?

Dy-Liacco says, “Chlorine in tap water is not strong enough to cause harm to the body and even makes water safe to drink. Chlorine from tap water, he points out, evaporates five minutes after coming out of the water.

In response, Harvey and Marilyn Diamond counter that chlorine was used during World War I to kill people.

“Chlorine (as in chlorinated tap water), combined with animal fats in the diet (consumed by the tons in the United States), results in a chemical union of the chlorine fat into a sticky, paste-like substance,” they explain. “This stuff adheres to arterial walls, thus causing atherosclerosis—heart disease, the biggest killer in this country [US].”

The authors add that the other poisonous chemical added to tap water is fluoride, which is supposed to prevent tooth decay. They argue, however, that fluoridation was found to cause more tooth decay than pure water. And yet such findings are largely ignored. Fluorinated water was also found to cause cancer.

They quote Dr. Dean Burke, former chief biochemist at the National Cancer Institute who said that “50,000 Americans a year are dying of cancer caused by fluorinated drinking water.”

The minerals contained in tap water are “inorganic” and therefore cannot be used by the human body.

“If such minerals are absorbed,” the Diamonds say, “they only interfere with the cell’s function. Therefore, cells reject inorganic minerals. They literally clog up the body and its vascular system.”

As a final dig against inorganic minerals in tap water, the Diamonds say that minerals, whether from tap water or supplements, “are nothing more than rocks or pulverized metals. Anyone who tells you otherwise is either selling mineral supplements or should be wearing a dunce cap to give you fair warning of his lack of understanding of this vital issue.”

To which Mr. Dy-Liacco counters, “I used to believe all that junk myself.  For 10 years I kept drinking distilled water, and that’s when I got my cancer, because it stripped my body of minerals. And as Dr. Kelly has found, cancer is a nutritional deficiency.”

So, what do I think of this whole controversy—should we drink only distilled water or just tap water?

I frankly do not know. I am neither an expert in chemistry nor biology. Both sides seem to have persuasive arguments to bolster their respective opinions.

Perhaps one way to resolve this is for us to toss a coin—and let pure chance decide the issue! (By Jaime T. Licauco)