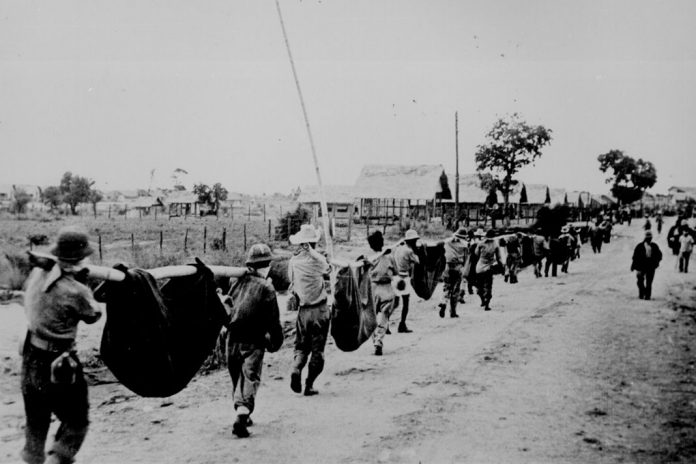 YOUNG STUDENTS MIGHT BEGIN TO ASK- are we such a masochistic nation that we celebrate “The Fall of Bataan” every April 9 and even make it a national nonworking holiday?

Those who survived- after five days of a scarcity of food, water, and medicine- later lived in even worse conditions in military camps and “death ships”. The Death March lasted for 5 horrible days under intense summer tropical heat.

The celebration last Tuesday was really to commemorate the bravery and heroism of the soldiers in the defense of Bataan and Corregidor Island for months- before the fall.

The valiant Fil-Am resistance under Army Major General Edward King forced the hand of the Japanese Imperial Army to recall the navy ships which were hours away from invading critical Australia – back to the Philippines in order to quell the massive Bataan Movement.

Historians often recall that had the Japanese not been contained in the area- the fall of Australia to their hands could have cut off the major supply sea lane of the Allied forces – and possibly turn the tide of victory of World War II in favor of the Axis Powers.

In September 1940, the Tripartite Agreement was earlier signed among Imperial Japan, Fascist Italy and Nazi Germany – stating that an attack on one is considered as an equivalent attack on the others.

The Philippines was, therefore, a natural target of the Axis power. In the 1940s the country was very much a vassal of the United States of America.

So when the Japanese warplanes bombed the naval base of America in Pearl Harbor, Hawaii – on December 8, 1942, within 8 hours, the Japanese also invaded the Philippines. Japan had stealthily posted Japanese agents in the Philippines in the guise of students, waiters, writers, farmers, and fishermen.

So when they attacked, Tokyo already had full information on the political, social and military situation in the Philippines.

The Fall of Bataan in 1942, was the first major land battle of the Americans and one of their worst defeats in warfare history.

Historians often refer to the Asia Pacific War as the theater of World War II- where right after the treacherous attack of Pearl Harbor, the Japanese handily subjugated nations in the Malaya, Dutch Indies, and Southeast Asia. Due to its proximity to Japan, the Philippines was one of the first to be annexed by the Japanese invaders.

The turning point in the Pacific War came after the Battle of the Coral Sea which effectively stopped the forces under Japanese Admiral Isoroku Yamamoto.

Sensing that thousands of American soldiers and millions of Japanese civilians would die if the Allied forces directly invaded Japan, US President Harry Truman ordered the atomic bombing of two military -industrial Japanese cities of Hiroshima and Nagasaki from August 6-9 1945.

Discouraged by reverses in several battlefronts and aware that America was poised to drop 7 more devastating bombs into Japan, Tokyo formally surrendered and ended World War Ii hostilities in the Asia Pacific regions on September 2, 1945.

Because of its proximity to Japan, the Philippines was also one of the last to be “liberated” by the American forces led by General Douglas MacArthur after his famous landing in Leyte. The liberation of Mindanao reportedly lasted through the months of August and September in 1945, according to war records.

The Axis powers were also being routed in Europe, Africa, and the Russian territories. Two significant battles, namely, “The Battle of Iwo Jima Island” and the “Landing of Normandy” were later translated into blockbuster movies in the modern era.

Germany’s Adolf Hitler and Italy’s Benito Mussolini were shamed before their countrymen for their ambitious goals of world domination together with Imperial Japan.

More than just “The Fall of Bataan”, the resistance put up by the courageous men of America and the Philippines in that province that somewhat delayed the crucial Japanese invasion of Australia is the real significance of the date.

It is, therefore, worth celebrating. And the bravery of heroes of that Death March worth emulating.