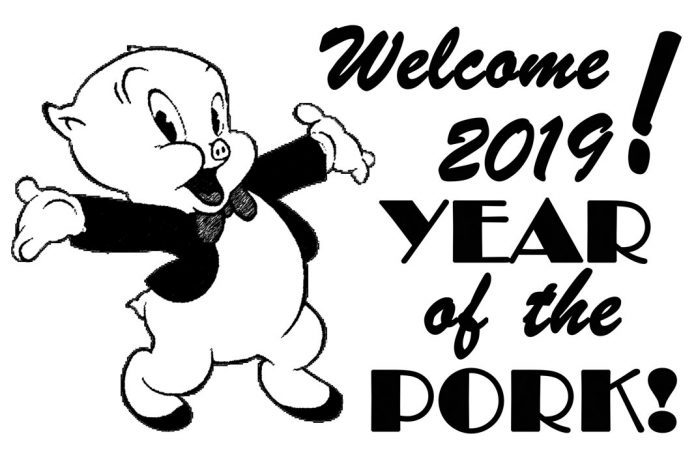 Some say it could rightly and timely  be called “ year of the (return of the ) Pork.”  The porky pig in government is back in the guise of billions of pesos of budget insertions.

To shorten the description of the anomaly, it is simply that next year’s annual budget is laded with surprise additions, add-ons and insertions,   but in the billions of pesos obviously for favoured congressmen and senators. This is unfair,  and smells, looks and talks like  graft again.

But in fairness, the difference is  that the money is inserted into the congressional budgets of national agencies and no longer in the name of legislators unlike before which practice was abolished by the Supreme Court.

But the porky pig is back in a different form but the same in substance. The favoured legislators  are allotted these insertions in the national budget of line agencies which is nothing but the same pork barrel. This time, by the billions. Incidentally 2019 is election year in May.  Will all the money go to their projects?  Those who say Yes, raise your hands.

But hey, the ordinary legislator is also getting the minimum “insertion” for his projects of P16-Million each, so they say . This has yet to be confirmed.  Well at least, we hope it will go to his district’s project and not somewhere else.

This is what one irate legislator called “legalized graft.”

This is not a good way to greet the New Year at all !.  The people are angry again.  The only way to stop these mal-practice is NOT TO VOTE            for these legislators who have billions of pesos in budget insertions notably for ELECTION YEAR 2019. Let us stop this  legalized graft   by not  voting for them next year, if ever the allocations will go somewhere else but the projects.